Our latest project involved a commercial conversion into an HMO from two connected office building, creating a luxurious 8 bedroom shared house in Stockport

We sourced the property from trusty old Right Move (where 90% of our deals come from – no fancy sourcing strategies for us), and we were drawn to it because of its attractive traditional red brick construction. It had obviously been residential in an earlier life, which we liked as it meant it wouldn’t look or feel odd when we converted it back to residential.

The property was listed for sale, but we had a few niggling doubts about planning so we struck a deal to lease it for up to twelve months with an option to purchase at any point during that period once planning was approved.

Ideally we’ll try to negotiate either a purchase subject to planning, or a lease option agreement on more complex projects like this where planning is uncertain.

Happily, planning was approved first time thanks to our superstar planning consultant Ralph Taylor (Senior Planner at Paul Butler Associates) and we kicked off the conversion work in Autumn 2018.

A number of people have said to us since we announced this project that they viewed it before us but couldn’t make the numbers stack, or work out the best layout. The properties each had a front door, a back door and no internal access between them, so we knew a fairly hefty shake up would be needed to make it work.

The main change we made as you can see from the new floorplans was moving the hallway from the external elevation to the centre of the building, essentially away from the majority of the building’s windows, meaning we could incorporate them into the new bedrooms. We also removed one of the staircases to create a single route through the house, and used the reclaimed space for bathrooms.

In addition to the floorplan changes which involved a lot of structural alterations, the property needed new windows throughout, the basement needed tanking and then all the usual conversion works – rewiring, replumbing, plastering etc.

It was a big project, as most of ours seem to be at the moment. We certainly don’t win any awards for the cheapest refurbs, but the numbers still stack up, and we sleep better at night knowing we’ve done a really thorough job on the renovation.

This was our first large HMO for a while and so I was keen to do something special with the Interiors. We opted for a monochrome theme, utilising the Farrow & Ball colours “Railings” & “Ammonite”.

In the bedrooms, in addition to all the woodwork, we did a feature wall in Railings. Recently I’d grown tired of feature walls and had begun to fear they were overdone, but by picking such a dark colour, and also picking the wall with the door on, instead of the typical behind-the-bed wall, I hope that we kept it somewhat unique.

I also saw an image on Pinterest (below) whilst doing our design planning, of a white kitchen with hexagonal tiles, dark walls and Edison bulbs and that became my inspiration for the whole house. Pretty close match right?!

We are big fans of utilising basement space for communal spaces, as not only does it free up space at ground level for extra bedrooms (bringing down your cost per bedroom – see our article on understanding your maximum cost per bedroom here) but you can also have a bit of fun with the fact it doesn’t have any windows.

In this instance we embraced the dark and gloomy nature, painting the whole room (including the ceiling) a single dark colour, and created a cinema room with character rather than a windowless lounge.

You’ll see we incorporated some timber cladding into the cinema space as well to add some texture, and carried this through to the home office space to create some flow…

In the lounge, I wanted something a bit fun as this is also the main entrance to the house. Inspired by another photo (this time on Instagram), we created this hand painted wall with a cleaning sponge.

As well as loving the design of this HMO conversion, I’m also pretty pleased with the numbers.

We purchased the two offices for £210,000 and our total costs including renovations, stamp duty, legals, lease payments to the landlord, and everything else was around £180,000, giving us a total spend of £390,000. It’s a lot of money to create an 8 bedroom HMO in Stockport, but we have really transformed this building and shouldn’t need to spend a penny on the structure of the building for decades.

It’s not the strongest ROI we’ve achieved, but with the rising popularity of HMOs and the buoyant property market generally, we’re keen to add projects like these to the portfolio that stand out from the competition and will continue to deliver good returns long into the future. 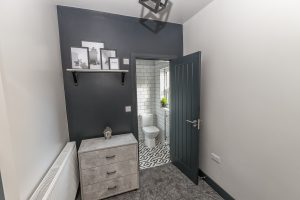 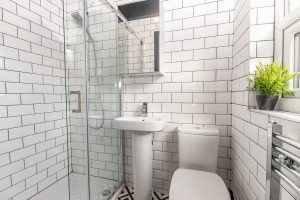 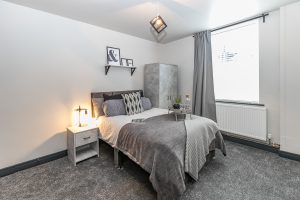 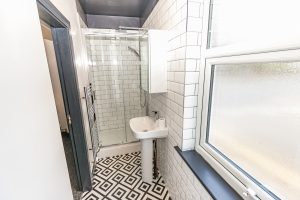 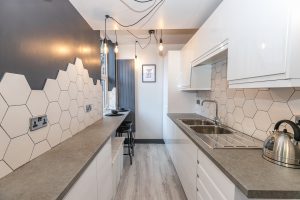