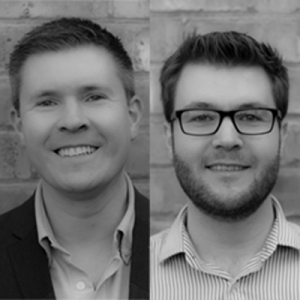 Listen on iTunes | Spotify | Stitcher Radio
Ben & Tom Thorns return to the show to share their final update towards their 2017 goals. They started the year with a big focus on HMOs and rent to rent deals, but as their land sourcing systems started to gain traction they’re now spending the majority of their time looking at these longer term projects.

Ben and Tom operate in the Greater Manchester area. They started out with the goal of increasing their monthly income by £12,000 pounds over the course of 12 months. When we last checked in with them 6 months ago, they had added five rent-to-rent properties to their portfolio and just about reached their half-way mark of an additional £6,000 per month.

With their rent-to rent strategy, they found that smaller, 4-bedroom houses were easier to manage than larger properties, and freed their time from the usual headaches that plague HMOs. With fewer bathrooms, lower bills and tenants that got along, the smaller HMOs became a stable source of funds.

They also bought a commercial building to convert into a 6-bed HMO but as a result of numerous problems caused by lack of clarity from various parties (planners, council officers, building control etc), the project became a steep learning curve. Ultimately, as Ben pointed out, it’s the developer that is responsible for making the right decision at the end of the day.

You need to do all the research and be confident in your decisions.

In the last 6 months, the brothers have switched their focus and now deal primarily with land sourcing and development projects. They currently have options agreed on 2 plots and are appraising and or negotiating on a further 8 sites.

They have created an automated system using Land Insight and Podio to source and manage viable sites, identifying 806 potential sites in Greater Manchester.

So far they have contacted 260 of those with letters and follow ups. Even though their results have been good, Ben is adamant on the importance of persistence. Following a persist-but-don’t-annoy scheme, he says “all of the action comes from the follow up”.

One of their options has a £900,000 GDV and will be developed into 2 executive-style houses. Construction will take place in a 9-12 month timeframe and the houses will be sold at the end rather than rented out.

With the help of these developments, they will have far surpassed their original £12,000 a month goal when the profits are realised, and are continuing with developments and land sourcing for the foreseeable future.

Looking Ahead to the Future

Although they will continue to project manage their existing pipeline of developments, Ben and Tom are keeping their options open. With more projects on the horizon, they will either hire a project manager or form a solid working relationship with a contractor to manage their projects for them.

Land Insight – Awesome tool for anyone looking for land and development deals
Podio – A great app to help with teamwork, collaboration and project management.

LivingSmart.co.uk – Living Smart’s main website
Facebook.com/LivingSmartHQ – Keep up to date with Ben & Tom on their Facebook page
Email Ben & Tom Thorns – Got a question or looking for some advice? Get in touch with them here.

PrevPreviousArticle 4 Directions: How and When C3 to C4 Permitted Development Rights Can Be Removed
Next12 Property Investors to Follow on InstagramNext