Business Rates – Getting an exemption during conversion to residential

In this post, I share my 12 month battle to secure an exemption and refund on business rates for a commercial property that we converted to residential…

Until fairly recently, most councils provided an ’empty and unoccupied’ exemption to residential council tax rates whilst an investor was completing works or waiting for a new tenant to move in. That removed a massive expense from us during those periods so (as you probably know) it was a big blow when around about 2013/2014 the government removed these automatic discounts and put the power in the hands of local councils to determine.

Nowadays most councils don’t offer any discount on empty residential properties (although a couple across the country will still give a 3 month exemption) so we simply had to get used to paying this additional expense whilst we were doing renovations or waiting on new tenants.

I thought that was bad enough, but then I moved into commercial to residential conversions at the end of 2015 and my problems with council tax paled in comparison to the business rates bill that landed on our door step. Whilst council tax on the houses we’d been working on was around £100 per month, this first business rates bill was for almost £12,000 for the year (and the building purchase price was only £210,000)!

Given we had a lengthy planning process ahead of us plus at least 6 months renovations, I had just received a significant increase to our project costs before we’d even started.

What followed was a lengthy process of education and arguments as we tried to understand how this cost could be reduced, and ultimately a rebate of around 50% of what we paid from our local council, paid out last week, a full 12 months after we started the process (if only we could threaten and hound them for payment the same way they do to us!).

What Discounts/Exemptions are Available for Commercial Property

If you’re about to embark upon a commercial to residential conversion, understanding the extra costs you’ll incur from business rates is important. As I mentioned above, we overlooked it on our first project which resulted in significant additional project costs.

The easiest way to find the current rateable value for a property you’re buying is to go to the search tool on the gov.uk website, where you’ll see the full details of each property in your postcode like in the screenshot below: 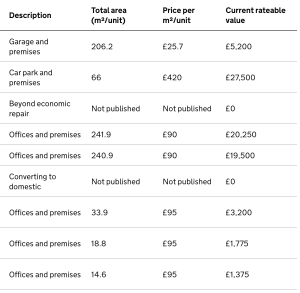 Obviously understanding your rateable value is only the first step though. What you really want to understand is how this can be reduced or completely removed as you embark upon your conversion.

The most common exemption people look for is the Empty Buildings Relief, but in most cases this isn’t worth holding your breath for. According to the government publication on business rates, councils only need to offer an exemption for the first 3 months a building is empty.

If you can get 3 months empty building relief then it’s a good start, but we can still do more.

The next option commonly explored is small business rates relief, which gives you a complete exemption from business rates if your business only uses 1 property, and the rateable value of that property is less than £12,000.

Obviously if you’re planning to convert the property to residential you might be thinking that this exemption doesn’t apply to you, but in a lot of cases now investors are setting up SPVs (special purpose vehicles) or specific limited companies for the purpose of buying and converting a building, so why can’t you use that building as your company office whilst you’re planning the project and doing the renovations in order to qualify for the discount?

It’d be best to speak to your accountant if you plan on going down this route as it’s a bit of a grey area, but it’s certainly been done before and as far as I can tell is a perfectly legal way of reducing your business rates bill.

Does Conversion to Residential Quality for a Change in Rateable Value

A lot of people this post might think the above discounts are redundant as they plan on converting the property to residential so can simply switch across to the lower rates of council tax and enjoy the reduced cost from that during the project.

Of course converting a property from commercial to residential will qualify it for a change from business rates to a domestic council tax rating, but not as early in the process as you might think.

In fact from our discussions with the VOA (Valuation Office Agency), various local councils where we operate, and several commercial to residential conversion experts, the classification of your property from a rateable value point of view won’t change until your project is complete and signed off by building control, meaning that for the duration of your project it will still be classed as non-domestic and subject to business rates.

So if empty property rates are worthless in most cases, and small business relief only applies to certain small properties, how were we able to significantly reduce our business rates bill before the project was complete?

The lightbulb moment came around the 5th time I called the VOA department for the North West, and I finally found someone willing to help rather than just direct me to their website which could, apparently, ‘answer all of my questions’.

The woman I spoke to not only explained about ‘Uneconomic Repairs’ but took my email and sent me a PDF (this PDF, in fact, in case you want to follow the same process) that gives details on what qualifies, how to apply for an exemption, and so on.

At a simple level, if your building is in such a poor condition that a reasonable person would deem it uneconomical to repair based on the potential rental income that could be achieved, then the VOA have the ability to reduce or even remove the rateable value.

It gets more complicated when you try to understand how to calculate whether the level of repair would be classed as uneconomical by a ‘reasonable’ person, but because there are no standard guidelines in this area, it comes down to you to make as good a case as possible as to why the repairs aren’t economical.

It’s also worth noting that the guidelines do specify that disrepair can be caused by numerous things including vandalism, neglect over a period of time, and fire/flood damage. It also says (rather vaguely) that disrepair can come about through the building being damaged.

If you’re on the same page as me, you won’t see anything here that says the damage needs to have been caused by a 3rd party. What’s to stop you getting your build team in to strip out the building to an extent that putting it back together to rent would be uneconomical based on the potential rent achievable as a commercial entity?

This is perhaps another grey area, so tread with caution but if you need to strip the building out anyway, perhaps wait until you’ve done so before you take any pictures…

The Process We Went Through

Given the guidelines, buying run down property may actually be more favourable than something that is rentable. That’s exactly what we did as our roof had basically collapsed, the electrics were dangerous, and cellar was more like a swimming pool, and many other issues existed throughout the building, so putting a case together that showed £40,000 worth of necessary repairs was pretty easy.

A few calls to local agents indicated the building might rent for approximately one third of that per year, which we felt was suitable justification that the repairs were uneconomical, and the VOA agreed.

We submitted our case (after several months of investigation, which hopefully you can avoid after reading this article) in December 2016. Given I’m writing this in September 2017, you can see it’s taken a while to get the exemption approved, so make sure you give yourself plenty of time.

Our regional VOA office indicates that they aim to respond to each email within 6 days, but may take up to 20 days. In a lot of cases it was longer than this, and in one case we waited 41 days for a response despite us following up 3 times after our initial message.

The case consisted of a cover letter explaining why we believed the repairs were uneconomical, the overall cost of works required, proof of achievable rents, and so on. We also submitted pictures of the building showing the damage and any works we’d already completed, as well as quotes and/or invoices for the works that supported our case.

Once the case had been submitted, we were notified it was going to be reviewed at the next ratings review meeting, 3 months from the date of the letter(!!!), and to let them know if we wanted to submit any supporting documents…

We reminded them we’d already sent the supporting documents, sent it again anyway, and then waited… and waited… and waited. After 4 months of not hearing anything we started chasing regularly again, and finally received the news that we had been granted an exemption from the date we started work (vs the date we bought the building – more on that below). It was still a victory in our eyes though and a refund to the tune of £5,000.

We contacted the council straight away who ignored us for a month before denying any knowledge to the change of rateable value for a further month before finally relenting and asking for bank details. Then, after 9 months of waiting and a further 5 days waiting on a BACS payment, the money hit our account and we breathed a sigh of relief.

Top Tips When Applying for a Business Rates Exemption

Based on our experience, the Uneconomic Repair exemption is the best route to pursue when converting commercial property into residential, but these tips we learnt along the way will hopefully make your appeal more successful (and certainly shorter):