Co-living vs HMOs: what’s the difference?

The number of 18-35 year-olds living in house shares has doubled since 1980. With tenants in London spending on average more than a third of their monthly wage on rent, it’s perhaps no surprise that innovative communal living concepts such as co-living are drawing so much interest.

A new way of living?

Boiled down to its fundamentals, co-living may appear like an on-trend, premium spin on the traditional house share. Out are grimy kitchens and draughty bedrooms and in are designer interiors and cinema rooms. However, as the term itself hints, co-living does not simply propose a house to share. It promises a shared way of living.

For some this marketing gloss belies the reality of co-living, in which tenants rent a private room but share communal facilities, as they do in HMOs. For others, failing to distinguish between the two is to gravely misunderstand this innovative form of living that can assist in alleviating pressing social issues such as loneliness. Here, we consider the appeal of co-living and unpick the differences between it and HMOs.

London is home to the world’s largest self-styled co-living space. The Collective Old Oak in north-west London has a staggering 550 bedrooms. The scale of such shared living complexes and the array of services they offer distinguish them from your typical HMO. Your normal flat share’s facilities usually extend to kitchens, bathrooms and living rooms. Old Oak meanwhile boasts a wealth of facilities, including a  gym, a cinema, and a ‘library of things’ – a store of useful household and DIY tools such as tape measures and hammers.

Interestingly, the vast size of such spaces in comparison to HMOs is not something people necessarily seek out. Whilst not all are on the same scale as the 550 bed Old Oak, even smaller spaces such as boutique Roam in Chelsea have 34 rooms, far larger than even the biggest house shares. However, a  recent survey conducted by SPACE10, IKEA’s future-living lab, found that people would prefer living in small co-living communities, contrary to the larger options generally available at present.

Many complexes marketed as co-living seem to be aimed at a niche higher-end of the market. HMOs or ‘house shares’ are meanwhile usually more evenly distributed throughout it. Admittedly at the upper-end of the market – even for co-living – the Staten Island Urby in New York sounds more like a 5-star hotel than a home. It has bamboo flooring, onsite restaurants and a heated swimming pool. Yet other planned co-living spaces such as Noiascape’s Red House in London are hardly offering the bare essentials. The prototype space will include yoga rooms, a library and a rooftop garden. 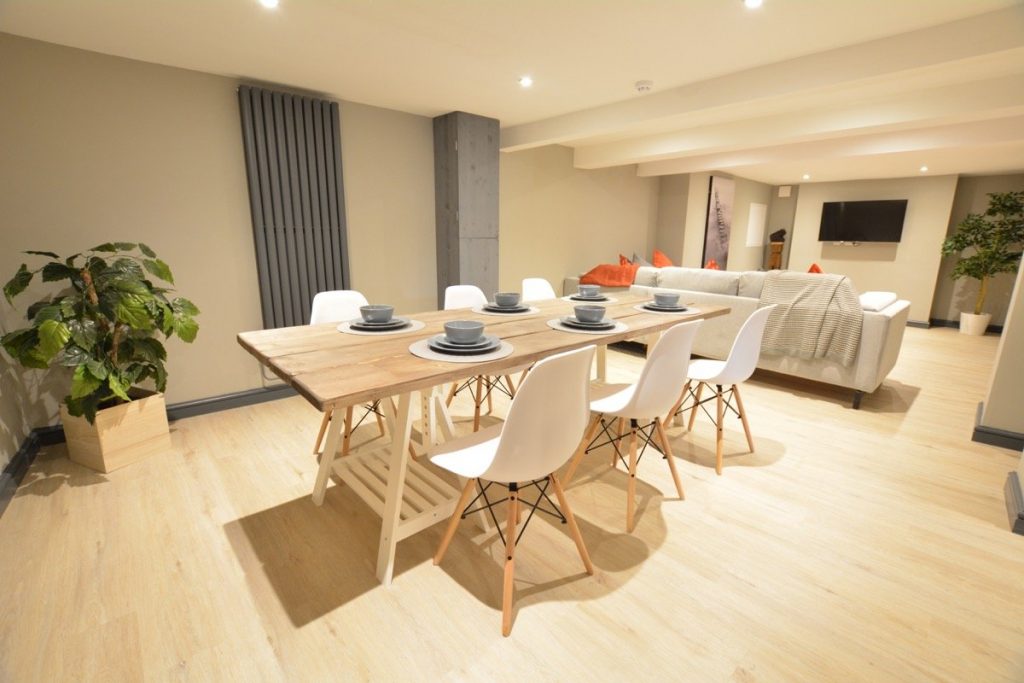 For property investor Rod Turner, HMOs are just one type of co-living. In the future, he anticipates a range of services being included as part of the rent that tenants pay.

‘I think the next thing will be convenience living where you don’t pay rent but you pay a “subscription” or “membership” and it includes rent, bills, gym membership, a Starbucks card, Deliveroo account, Netflix, gardener, internet… and all the mod cons people use day in day out.’

Strikingly, Noiascape’s Red House will include a Netflix subscription as part of the rent.

However for Luke Spikes, CEO of higgihaus, which offers co-living spaces in Swansea and Bristol, the concept is markedly distinct from HMOs. ‘First off we don’t use the term HMO because HMO is a term that’s not understood by our target market,’ he says.

‘We’re worrying about what it feels like, given our objective is to foster greater social living. You’ve got to think deep and hard about how the building works. Putting in a feature wall is not co-living.’

The Swansea property, higgihaus@hanover, has five en-suite bedrooms, placing it on a scale similar to your standard HMO. A community manger, who oversees the property, is responsible for creating experiences for the residents. Indeed, the potential for social living is one of co-living’s biggest draws. Respondents to SPACE10’s co-living survey said the main attraction of co-living was socialising with others.

‘At the end of the day it’s mostly chance as to whether the tenants choose to embrace living together and form a household, as opposed to being individuals who vaguely know each other as they live together.’

Whether you’re inclined to think co-living is a radical evolution in the way we live or merely a novel twist on an existing concept, one thing is for sure: it’s going nowhere. Co-living spaces are likely to outperform conventional rented flats in the future because the return per square foot is higher. And complexes similar to London’s Old Oak are lined up for other major UK cities, including Manchester, Leeds and Birmingham.