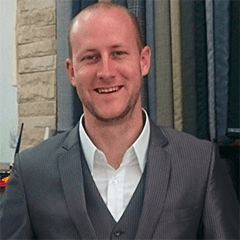 111: Goals Part 2: Dane Sampson is our second guest taking part in our three part goal tracking series. Follow his property journey throughout 2016, starting with this introduction to his goals for the year.

This is the second interview in our series where we’ll be following a small group of investors throughout the year to see how they progress towards achieving their property goals. Our first in the series was with husband and wife team Lloyd and Marta Smith, and I’m delighted to say we’re continuing with an equally passionate property investor, Dane Sampson.

Dane was born in South Africa but moved to the UK in 2004 at the age of 14. He left school shortly after when he was 16 to work as a trainee administrator but realised this wasn’t for him so started up his own cleaning business. He saved every penny he could to get on the property ladder, and succeeded in July 2012. By January 2013 he’d also bought his first investment property and has since gone on to grow his portfolio and his ambitions.

Make more money and pay less tax on your property portfolio with the help of Optimise Accountants, the UK’s premier accountants specialising in the property market. Book a free initial consultation now at OptimiseAccountants.co.uk.

Dane currently owns a property and has recently bought the house next door as well. His plans are to build 2 x 2 bedroom houses on the plot of land as well as building his own home on a separate plot, giving him 3 confirmed new builds to complete.

He also has a few other deals in the pipeline but appreciates that external factors in the property world can suddenly change the viability of a deal or throw the planned timings out the window so he’s being realistic about what’s achievable whilst always keeping his eyes open for the next opportunity.

These development projects all fit into his top line goal of generating a net profit of £300,000 this year.

Dane found his 3rd deal on the internet through a sourcing agent and thought the best way to generate future deals was to build rapport with the agent. He went about this rapport building by committing to the deal quickly and making sure the agent knew he was serious, despite the figures already being tight on the project.

His view at the time was that even if it wasn’t the best deal in the world, it would pay off in the long run by ensuring he got first pick of future properties.

Unfortunately the renovation ended up taking a lot longer and costing a lot more than he initially though, resulting in bridging costs alone of £22,000 which ate up his entire profit.

Not only did his profit vanish, but so did the sourcing agent who went out of business just after Dane completed on this deal.

PrevPrevious109: Nick Leatherland is a full time Royal Navy Submariner who, at the age of 27, also happens to have a very successful property portfolio, investment company and letting agency.
Next112: Goals Part 3: Anthony Hubbard is our final guest taking part in our three part goal tracking series. Follow his property journey throughout 2016, starting with this introduction to his goals for the year.Next