Every HMO will have its own unique electrical requirements, and every HMO owner will have their own unique specifications, dependent on the location, the target market for the property, and the local authority minimum requirements. Sadly though, there is no standard HMO electrical wiring guide to call upon for your next project.

Having said that, it’s always useful to have a starting point, and this is intended to give you an idea of what we would typically install in a mid- to top-end HMO, which would fetch somewhere in the region of £90-£100 per room per week in Hull, where we are based.

Starting off with communal spaces (hallways, lounge and kitchen) we have a fairly standard specification for our installations now.

Our kitchens are usually equipped with two ovens – one supplied by electricity and one supplied by gas. This means that if the power should ever go off, food can still be cooked and likewise if the gas goes off. We do the same with the hobs for exactly the same reason.

We install enough sockets to comfortably supply power to the various working areas in the kitchen for kettles, toasters, fridges etc. Any below counter sockets are controlled via a switched fuse spur positioned above the counter, which simply allows easily isolation of the socket below if ever required. This comes in very handy for heavy appliances like washing machines, and can save a lot of hassle in an emergency.

LED Spot lights are a no brainer, particularly in the communal areas as they don’t have to be IP rated so don’t cost the earth. They also look great if you have had a new kitchen fitted or just want to spruce up the existing one. We put occupancy sensors on the lights in the communal areas which has a double benefit. Firstly, it prevents lights being left on when nobody requires them, and secondly it means the tenants don’t need to fumble around for light switches if they get home when it’s dark.

Further sockets are installed in the lounge, along with a coaxial TV point, and a socket is installed on each landing for things like vacuum cleaners.

Our typical kitchen wiring specification would look something like this:

Bedrooms are relatively straightforward when it comes to wiring, but there are a few things to consider and a few additions to add the wow factor.

The most important specification is deciding on socket locations, and this should be determined by where the furniture is going to go. If you haven’t decided on that yet, it really helps to think it through before running cables.

One socket is positioned next to the TV point (either low level or high level depending on whether or not the TV will be wall mounted). Two further sockets are positioned in convenient locations for general power usage, and the final one is positioned next to the bed for the bedside table. For this socket, we use a double socket with integrated USB charging ports, allowing phones etc to be charged without the need of a power adapter.

We also install two light switches in the room. One is positioned in a conventional location close to the door, and the other is positioned next to the bed, allowing the occupier of the room to operate the light from the bed. It’s not a massive thing but we find it’s the small extras like this that separate our service from the rest.

The TV points are a simple coaxial cable run to a central location in the property (usually the loft) where all the cables are terminated into a booster/amp.  The boosters require a 230v power supply, so make sure you get a socket installed close by. It also requires a main aerial cable in from the aerial positioned on the roof. This setup will allow every bedroom to get access to the usual Freeview channels.

We also install a network system which simply consists of running Cat5 cable from the router to a point in the bedroom. The cables are terminated to a plate in the room where the tenant can plug in laptops, consoles etc. It’s more effort than most landlords go to, but a good internet connection is one of the most important things that our tenants look for so we feel it’s worth going to this extra effort for them.

In our area, we’re seeing a growing trend towards providing as many en-suite rooms as possible. Regardless of whether your bathrooms are communal or en-suite, the electrical requirements will be similar.

When choosing lights for bathrooms, the fittings will need to have an IP rating (ingress protection), which is basically a measure of how resistant the fitting is to steam and moisture. The IP rating of our spotlights is usually IP44 or greater, which offers limited water resistance. They are a little more expensive than the usual spotlights, however an incorrectly specified spotlight runs the risk of blowing the LED lamp and tripping the consumer unit.

Something else worth considering when installing several bathrooms is that you can’t simply run a 10mm cable from your consumer unit to each electric shower. Great care must be taken to ensure that the incoming electricity supply can handle such a load. 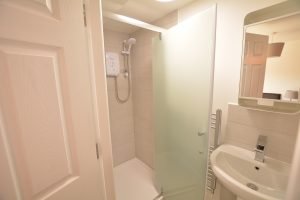 If you have a 3 phase supply (consult a qualified electrician if you’re not sure how to determine this) you can be pretty certain that you have sufficient capacity to run multiple electric showers, although other factors also need to be considered like the heating system used etc, as if you are considering electric heating you may find yourself pushing the boundaries of even a 3 phase supply.

The last thing you want is your tenants without power because the main fuses have blown. Those phone calls never come at a good time! It’s always 9.00pm in December when it’s snowing.

If the property only has a single phase supply then this may require you to look at a more conventional hot water system. It doesn’t mean you can’t offer 1 or 2 electric showers in the house, and we often find on 3 story buildings the ground and first floor are fed via the boiler and the 2nd floor bathrooms will have electric showers fitted.

The final point to mention is when we carry out requires on HMOs, we install a new fire alarm system and new emergency lighting scheme. The fire alarm system we install is always compliant with requirements for a licensed HMO and often causes a few raised eyebrows where it may seem like overkill to install such a system, however in my opinion it speaks volumes when the tenant looks round the property for the first time and sees that their safety has been given so much consideration.

Also, it future proofs the property. Even if it doesn’t require a license at this stage, that could change in future with the proposed changed to licensing, or you may wish to extend and add more rooms at a later date. I always like to think it’s better to do it up front than wish you had done it in future.

Each floor is split into a zone, and the landings/stairways in the property are also deemed as a zone when wiring the system. Break glasses are installed at every exit point of the property and along the escape routes.

When choosing an electrician it is important to ask if they are part of any relevant associations. In the industry there are many different schemes for engineers to subscribe to but the most common ones are NAPIT, NIC EIC and Elecsa. It simply means that if the engineer is affiliated with any of these associations, then the work he has carried out is fully insured and can be signed off under part P of building control.

On large projects it would also be recommended to take copies of the electricians and other trades insurance documents for your records. Any projects we undertake are issued with a contract to ensure the client is going to receive what is expected and likewise we deliver what the client is expecting. Attention to detail such as this should put your mind at rest when choosing a tradesman.

When issues arise it is usually down to a breakdown in communication between the trades people and the client and the majority of problems can often be overcome with a sit down and a coffee!

It’s also worth making sure you start off your project on the right foot, so this HMO electrical wiring guide can hopefully help you achieve that.