The quarterly rental index from SpareRoom was recently released for the second quarter of 2017, showing average room rates, annual changes by city and region,  and the areas with the highest demand for HMO rooms.

Starting off with the regional averages, it’s no surprise that London still leads the market by a long way, 44% higher in fact than the rest of the South East. Interestingly though, London prices have dropped 2% compared to the same period last year, the only area to see a drop whilst the average growth across the rest of the UK was 3%. 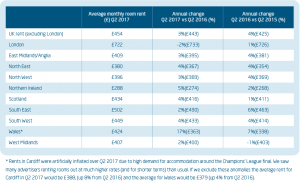 The South East is the only region to have an average monthly room rent in excess of £500, and whilst no other regions look likely to break that £500 per month mark any time soon, the North East and the North West look poised to break through the £400 average in the next 6 months or so, leaving Northern Ireland the only other area sub-£400, at an astonishingly low £288 per month average.

When you break it down further and look at the 50 largest cities/towns the story is a little different.

Belfast is showing pretty rapid growth at 7% compared to last year, as are Coventry, Huddersfield, and Walsall (all 8% growth), Stockport showing 7% growth (must be down to us achieving an amazing £700 for a room recently in our Churchgate project!), and Edinburgh with a massive 10% growth compared to this time last year.

At the other end of the scale, several cities are showing a decline in HMO room rates compared to last year including Aberdeen dropping by 8%, and both Sunderland and Swansea dropping by 7%.

If you’re more interested in where the highest rents are achievable, then it’s no surprise that the majority are clustered around the South East again, either within the M25 or just outside it.

The exception to this though are the two most expensive areas, achieving an average of £763 and £724 per month respectively – Guernsey at the top, and Jersey in a close second.

The final table shared by SpareRoom shows where the highest demand for rooms exists across the UK. 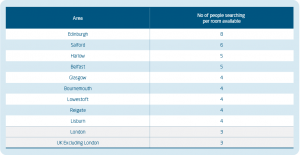 Edinburgh, at the top of the growth table with 10% compared to last year, also has the largest demand with 8 registered users looking for every room.

We always take this table with a pinch of salt though, for 2 reasons.

If you’re interested in doing specific demand analysis on a postcode by postcode basis for your target area, this is covered in detail in Inside HMO Investing.

Overall it looks like room rates are still creeping up steadily across most parts of the UK, so despite fears over saturation and too much competition, for the moment at least it seems the supply hasn’t quite caught up with demand.  How much longer will that continue to be the case? That’s the million pound question!