087: Kriss Akabusi dominated the world athletic scene during the 80s and 90s, and has now turned his attention to property investing with the help of Platinum Property Partners 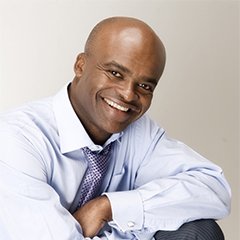 Kriss is better known for his athletics success than his property investing, winning a plethora of medals at Olympics, Commonwealth Games, European and World Championships, including a British record in the 400m hurdles which still stands today.

He was appointed MBE in 1992 for his services through Athletics, and went on to have a successful career as a TV personality, philanthropist through the Akabusi Charitable Trust, and as a highly sought after motivational and keynote speaker.

Then, at the start of 2015, after giving a motivational talk at the Platinum Property Partners National Workshop the previous year, Kriss decided to join the successful HMO franchise business and build his own property portfolio.

Kriss lived through recessions without really noticing them as his ‘jobs’ in the army, as an athlete, and as a TV personality protected him from the worst effects. With the most recent recession in 2008 though, he began to realise he was more likely to be impacted in future if he continued his lifestyle of not just earning a lot of money, but spending a lot of money, so he began to look for investment options that would continue to provide him an income regardless of what the economy was doing, and rental property was the most appealing answer he found.

For the next 5 years, he plans on buying one property per year with the support of Platinum Property Partners, turning them into professional HMOs that give him an average of £20,000 profit per year. At that stage, he thinks he’ll most likely continue to work as he loves what he does, but he’ll be much more satisfied in the knowledge that he doesn’t have to work.

Kriss has faced difficulties when looking for property to buy that most of us are lucky enough not to have to worry about – the Akabusi factor! He would show up to view potential investments and the price would shoot up 20-30% when the agent realised who he was. Not exactly a BMV deal!

What he’s come to realise is that when he’s investing for cash-flow, it’s more about whether the numbers still stack up, regardless of the price and what other similar properties have sold for. Having a good deal analyser spreadsheet has allowed him to take the emotion out of the decision making process.

Wilful Blindness: Why We Ignore the Obvious

PrevPrevious086: Billy Turriff is an ex-pat investor based in Dubai who has built up an excellent property portfolio whilst working full time in HR
Next088: Matthew Siddell is a well educated, highly experienced entrepreneur who foresaw the inevitable decline of his previous business and made the switch to property with precision timingNext