055: Paul Smith has one thing on his mind when it comes to property investing – Joint Ventures 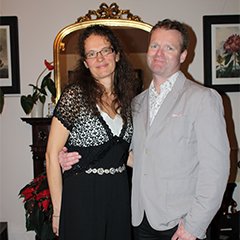 Paul is one half of the husband and wife team that were named Progressive’s Investors of the year in 2014. Along with Aniko, he has been investing in property for 10 years since being made redundant from his management position at a bluechip company in 2004.

He has progressed from single lets to HMOs and commercial conversions, and along with a continued focus on his own investing, he also hosts the Glasgow Progressive Property Network every month.

How To Become a Successful Property Investor is a full day training course run by the amazing Vicki Wusche. It’s ideal for you if you’re just starting out on your property journey, or with a new strategy. You’ll leave the day with a personalised business plan tailored to your strengths, and be supported by Vicki for 3 months to get your property business off to a flying start. Find out more at insidepropertyinvesting.com/SPI

There are three primary strategies that Paul and Aniko focus on. The first is serviced accommodation which Paul discusses in great length during the show; the second is commercial conversions (typically offices into residential); and the third strategy is Houses of Multiple Occupancy.

Paul & Aniko bought a 3 bedroom flat in Dumbarton for £33,000 using Joint Venture funding. The property had originally been 2 x 1 bedroom flats, and they knew that if they converted it back, each 1 bedroom flat would be worth £55,000.

They completed the works for £24,000, and were left with 2 x 1 bedroom flats that would have achieved £350 PCM rental income. After mortgage costs/voids etc they would have been left with a reasonable cash flow of £150 profit per flat per month, but Paul had another idea up his sleeve.

They then decided to run them as serviced accommodation units, giving them £800 NET profit per unit per month, giving a total of £1,600 monthly profit from the deal after getting £25,000 back out of it as well.

When Paul was 22, he purchased a 3 bedroom detached house with his best friend. The agreement was that the friend would live in it and let out the other two rooms, so Paul’s mortgage payments would come from the renal income.

Unfortunately the market crashed, and whilst Paul wanted to sell to move on to the next project, his friend wasn’t willing to. Not only that, but the friend had little incentive to rent out the rooms so for many years the property was usually only occupied by one person.

Progressive Property Network Glasgow – Details of all upcoming PPN events in Glasgow
BBC Mortgage Calculator – Do your deals still make sense at 12%?
Richard Branson Airline Story – The section on ‘protecting the downside’ is a great example of a joint venture agreement with Boeing that allowed Branson to start an airline with minimal risk.

PrevPrevious054: Saj Hussain is the Property Joint Venture expert, with over 150 tenants using none of his own money
Next056: Rob Stewart spent 12 years flying in the RAF before realising that property could replace his income and give him more time with his loved onesNext