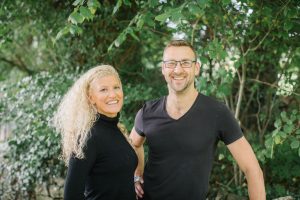 Many people stay away from  student HMOs. Some are worried about the high intensity maintenance. Others are fearful the market is oversaturated. Tom and Philippa Charrier think differently. They’ve built a successful portfolio of student HMOs in the historic university city of Lancaster, in Lancashire. They talked to us about fostering community through design, branding and how they juggle property, day jobs and family.

Tom and Philippa met each other whilst working at a multidisciplinary architecture and landscape firm. Philippa, who studied architecture at university, bought her first property whilst studying for her post-grad degree in Edinburgh. ‘We’ve been heavily involved in property all our way through lives,’ she says. ‘I let two of the bedrooms out to my friends and I lived in the lounge.’

Tom, who studied Landscape Architecture, bought his first flat on a fixed rate mortgage in Manchester in 2007. It wasn’t the best of starts. The financial crash hit a year later. The value of it crashed, whilst  he missed out on the subsequent drop in interest rates. ‘The first couple of years… it just felt like a horrible ball and chain,’ he recalls. ‘The rent wasn’t covering the mortgage. I was out of pocket every month.’

A conversation with a friend, who was complaining about the size of his pension, made him rethink the flat. ‘He was moaning about his pension, saying his pension was only going to pay him a few hundred pounds a month when he retires,’ says Tom. ‘I was thinking ah, that’s interesting my flat will pay me that every month and the pot won’t deplete.’

After deciding to try their luck with property,  the couple – who live in Kendal – began thinking about where to invest. Preferring to invest nearby, they looked at Preston, Manchester and Kendal itself before settling on Lancaster. The quality of the architecture in Lancaster  swayed their decision. ‘I think with Lancaster, the properties are actually quality properties,’ says Philippa. ‘The architecture is fantastic… the proportions are spacious. There’s a lot of quality architecture in Lancaster, which with Preston we didn’t get that same feeling with.’

The couple used a managing agent on their first HMO project, but had a terrible experience. They soon realised they could do better themselves. ‘He was not maintaining the properties properly. He wasn’t organising gas checks,’ says Tom. ‘He ended up on BBC Rogue Traders.’ Since then the couple have managed all their properties themselves. .

Tom and Philippa carve a niche in the student HMO market through their commitment to design quality, service and community. ‘There’s an authenticity to genuinely caring about their [students’] experience when they live in one of our houses,’ says Tom. ‘That they have what they need, that they get what they need.’

‘Before we even get through the door we’re looking at location. Location is key,’ says Philippa. ‘Is it a safe neighbourhood?’

‘I will always walk away from a project if there’s no step back [from the street]. It’s a security point of view […] For me personally, I would always be a bit scared about people just walking down the street trying door handles. In student areas, crime is a big issue. Every student has a laptop, a phone, anything, they could just walk in.’

When it comes to the bricks and mortar, the first thing they’re looking for is space, indoors and outdoors. They set their own minimum requirement for bedroom sizes at 10M² and they say outdoor space is important for summer socialising, such as having BBQs. ‘I guess we come at it from a what’s it going to be like to be in the space point of view, rather than a my spreadsheet tells me this would be great with another bedroom or two,’ says Tom. ‘We’re coming to it from a user point of view rather than our investment point of view.’

With regards to interiors, they like to work with the materials of the properties themselves. ‘It’s respecting it,’ says Tom. ‘It’s not introducing too much crazy stuff.’ They add their interior flourishes to communal areas that student won’t usually decorate, whilst leaving the rooms as blank canvases that they can personalise with posters.

With the increase in purpose built student accommodation in many university cities like Lancaster, many are concerned about their effect on the student HMO market, but not Tom and Philippa. ‘It’s a different offer… we’re offering a home from home,’ says Philippa. ‘They want a bath – in all our houses we’ve got baths – just that feeling of being at home. They can have parties. They can have people round for dinner.

‘These multipurpose blocks… generally the room sizes are a lot smaller than we’d provide. It’s basically moving from halls at university to halls in the city centre.’

For Tom, purpose built accommodation is only a threat to poor quality HMOs. They say that Lancaster University Homes, an organisation set up by the university to check the quality of HMOs is also having a positive impact on quality. ‘You can see this year there has been such a jump in quality of the student houses, which is superb for the area, superb for the students,’ says Philippa. ‘Landlords can’t be lazy: they’ve got to up their game.’

Optimistic about the continued demand for their brand of student HMOs, Tom and Philippa plan to stick to their winning strategy for the foreseeable future. ‘We’re just getting constantly inundated with calls about wanting to rent one of our houses,’ says Philippa. ‘We’ve had to say look sorry they’re gone.’ They’re also currently working with branding experts in order to develop their Fat Properties brand and have begun partnering with investors.

With three young children and Tom still working a corporate job, it’s a challenging schedule to say the least. How do they manage it all? ‘Waking up early, 5am, before the Kids are up. Working after the kids go to bed,’ says Tom. ‘No sleep, more coffee.’

fatproperties.co.uk – for more information about their properties and projects.

PrevPreviousHow much should you be spending on an HMO?
NextStockport 2nd best place for buy to let investment in England and Wales, as northern postcodes boomNext