029: Richard & Brynley Little are father and son developers looking to do property deals that deliver a win-win-win 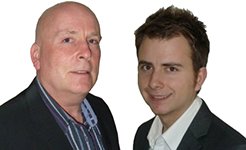 As the father of the pair, Richard has been involved in property for almost 40 years, since he was 18 years old. He is a 2nd generation developer and has built up a wealth of wide ranging experience in development, planning and construction. A bricklayer by trade and a building surveyor by profession Richard has developed thousands of residential units along with some commercial, retail and industrial.

Following a similar path to his father, Brynley has also been involved in property since the age of 18, making him the 3rd generation in a property development family. He studied landscape design & construction before working on projects for the BBC as well as his award winning show garden for the Royal Horticultural Society. Brynley has worked as a building contractor on development sites of various sizes playing an integral role in design & build projects.

After a year on Simon Zutshi’s Mastermind programme, they were voted as top performers and are now helping others who want to achieve similar success with property development and their own property projects.

During their mastermind year, Bryn met an old colleague of his at a petrol station and explained what he was doing (remember, tell everyone you know what you do!).

It turns out that he was an ideal ‘motivated seller’ and Bryn was able to manage that relationship over a period of time to the stage where they were able to make an offer, help the old colleague out of his difficult financial position, and move Bryn’s sister, her husband and daughter into the property which has improved their standard of living hugely as well. Their first win-win-win!

26 years ago, Richard found a project in Shropshire – a 27 room mansion that was on the market for £155,000. He thought it would be great for conversion into luxury apartments with a GDV in excess of £1,000,000, but they would move in to it as the family home for a while first for tax reasons.

What he didn’t do was consider that this was a huge step up in project size compared to his previous developments, and things started to crumble. Planning was rejected, they failed to get it on appeal, the whole deal fell apart and they basically lost it all.

The one thing it has taught Richard though is to appreciate he always has more to learn and to surround himself by the right team for the type and size of project he’s working on.

PrevPrevious028: John Kerr has been investing in property for 40 years and has built a diverse portfolio including single lets, holiday lets, LHA tenants and HMOs
Next030: Richard Jones is Your Property LandlordNext