019: Richard Brown identified those painful gaps in his property knowledge and took actions to plug them 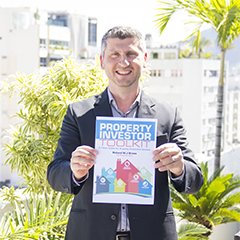 Richard’s first property investment was in the mid 90s, and is still his biggest regret as he sold it less than a year later. His second ‘first investment’ was in the mid noughties, after his eureka moment in a pub beer garden.

After a relatively short period of time, he’s resolved his poor financial position resulting from divorce, debt, high expenses and no home ownership, and is now in a place where he could retire if he wanted to. He primarily focuses on adding value to property and recycling his funds to grow his investing.

He shares his wealth of knowledge willingly through forums, his own blog and most recently, his own book.

How to Get Rich – Not Quick

The 7 Habits of Highly Effective People

Richard is most proud of the cookie cutter approach he has developed and can now apply to most of his projects, making deals very easy to find and develop without too much stress. One such example was a bungalow in Derbyshire, being sold by an estate looking for a quick sale.

It required a fairly modest schedule of works – around £8,000 in total. He bought it for £95,000 and had it revalued after the works at £135,000, although his original plan to flip it was reconsidered when the next door neighbours listed their property. Rather than competing on price, he’s decided to hold onto it as a rental which has been occupied ever since.

Richard took on a non-standard construction property in Cornwall that wasn’t mortgageable. He was able to purchase it at a very low price as a result, however what was supposed to be a 6 month rebuild ended up taking over a year due to fighting between the project management team, contractors and sub-contractors.

PrevPrevious018: Simon Misiewicz is the hugely successful owner of Optimise Accountants, and a very successful property investor in his own right
Next020: Vicki Wusche doesn’t believe in time being an excuse. We all have the same number of hours in a dayNext