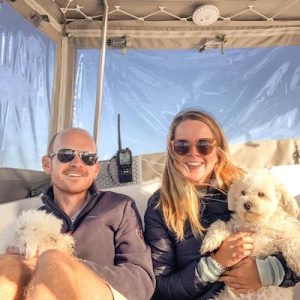 Project by Inside Property Investing

In this case study we take a look at the details of a commercial conversion project in Heaton Chapel, Stockport to create a mixed use scheme of ground floor retail space and two serviced apartments.  Despite many setbacks including structural issues and difficulty securing long term mortgage finance, the monthly income after 12 months is strong and the long term outlook is positive.

What gave you confidence that this deal would work?

There were a couple of reasons that we ended up with a passion for doing this deal.  We had seen the rise in popularity of serviced accommodation both for travellers (due to the convenience and more personal experience over staying in hotels) and for investors, where the ‘right’ project (popular location, well managed, quality renovation etc) could be very profitable.

With a portfolio consisting predominantly of HMOs we had been thinking about diversification for a while but the income of single lets just didn’t get us excited, so serviced accommodation really appealed to us.

We had lived in this area for a few years and were well aware that accommodation choices for anyone visiting were limited. You had a couple of cheap and cheerful chain hotels and then some seriously old-school family run options, but there wasn’t anywhere we were comfortable recommending to friends or family without heading into the city or out to the more affluent you.

Heaton Chapel is far from a tourist spot but there’s a big (and fairly affluent) population who we assumed would have guests visiting like we did, and it’s well located for people working in South Manchester or the city centre.

We did some analysis on AirBnB to see if other apartments in the area were getting bookings, but ultimately it was based on our local knowledge and a few assumptions.

How did you source the deal?

We’d been at a networking event in London where one of the speakers was talking about airspace development, so all of a sudden Mike was obsessed with finding a deal where we could build up.

The building was very local to us so we noticed immediately when an agent put their board up.  It was a two storey commercial building (tenanted on the ground floor with a vacant office above) with an adjoining 3 storey building as a neighbour. As far as prime projects for increasing the height go, this couldn’t have been more of a sure thing from a planning perspective.  The only problem was, it was to let rather than for sale, and only the vacant first floor.

We contacted the agent anyway and arranged a viewing to confirm if the first floor would be suitable for residential, and then began the process of following up every month to see if they’d consider selling it.  We knew if they found a tenant the deal was off, but persistence won over and after about 6 months of marketing the property our offer to buy it was accepted without it ever going on the market or another investor stepping through the door.

It doesn’t always work as each owner has their own master plan, but vacant commercial property that’s been on the market to let for a long time is often ripe for buying without having to worry about other investors getting involved and talking the price up.

How did you finance the deal?

This project was a joint venture between us and an investor based overseas. We used their funds to purchase the property and then secured development finance for the renovations.

The JV agreement was typical for us in that the profits would be split 50/50 so there was no direct cost during the project, and the development finance was from Together at a rate of 0.9% per month with the loan split into two drawdowns.

How much work was required?

The first hurdle was getting planning permission, but we made a start on this during conveyancing and had a good indication from our planning consultant that it was going to be approved before we completed. Their indication was correct, and our plans to add a full additional storey plus a loft space were approved without much incident.

The issues started shortly after when we were finally able to dig trial pits and determined that the foundations really weren’t up to taking the additional load that the new floors would add. Reluctantly we had to give up on our airspace dreams and submit a new planning application to add an apartment in the loft space by raising the roof pitch, but removing the additional storey.

This was again approved, but even to achieve this needed some serious engineering – tons of concrete and what felt like enough steel to recreate the Titanic.

Once the building was structurally sound however it was a relatively smooth project and an enjoyable one to be involved in.  The roof trusses were made up off-site and craned into position in the space of a day which was fascinating to watch, and with serviced accommodation as our end product we had a little more budget to play with for the interiors as well.

It was a full back-to-brick renovation, replacing all electrics and plumbing and virtually every wall within the building.

Despite the actual project being a bit of a write-off with the costs escalating and GDV decreasing, the first year of running the apartments as serviced accommodation has been a great success with us quickly getting up to 70% occupancy from the major portals, and more recently a focus on direct bookings starting to pay off.

We’re also thrilled with the response we’ve had to the design of the apartments, from fellow investors as well as our guests. When creating serviced accommodation, you want to offer a memorable experience whether your guests are on holiday or travelling for business – we tried to create something as comfortable as your own home but with modern design that looks better than our hotel competitors.

Mike spent a lot of time trying to automate as many of the processes as possible related to guest stays as we were aware that SA management can be quite time consuming, and this has worked really well (in the main!).

Each apartment is set up for self check-in with keyless locks, and access codes that are automatically generated for each guest, and our VA in the Philippines manages the rest of the process ensuring things like booking confirmations and review requests are sent to the right guest at the right time, and that our cleaners know when each apartment is ready for a changeover.

What would you do differently?

With hindsight it’s easy to say we would have done more to confirm the structural situation before completing, but the reality is we couldn’t get permission to dig up their cellar until we owned it, so there was always going to be an element of risk involved.

Unfortunately these issues resulted in our development being smaller than we hoped, whilst still incurring additional costs to stabilise the building, and with these two factors going in opposite directions to what we would have liked we ended up leaving more cash tied up than we originally anticipated.

This was made worse still by the fact we had a seriously limited choice of lenders in the SA market as a result of Brexit uncertainty. Rather than commit to a 5 year fixed deal as originally planned, we choose the best from a series of bad options for a 2 year fix with a view to refinancing at the end of 2021.  The Covid pandemic introduces new uncertainty about where the market will be at the end of 2021, however two years of trading accounts showing high occupancy and profitability should open up a few new options to us.

We’ve also learnt a lesson about renovating partially tenanted property. The income from the ground floor was a nice boost (£850 per month from a barbershop) but had they not been there we would have had an alternative (cheaper) option for the structural work, and one less thing to worry about as dust and noise filtered down from above.

Even knowing what we know now, we’d still do the deal again – perhaps limiting our ambition slightly from day one and starting with the easier scheme to save on time and cost – but we’ve got a valuable asset with a strong recurring income in an area that seems ripe for capital appreciation, and whilst the £100,000 tied up for 2 years is not what we planned, we invest for the long term and following the next refinance we should be in a position where the increased loan plus two years of profit has reduced the cash left in to £0, giving us a fantastic return for years to come.

Victoria and Mike are property developers operating in and around Stockport, South Manchester. They’ve been investing part time for over a decade and full time since leaving the corporate world in 2017 and 2015 respectively. As well as growing their portfolio of HMOs, SAs and single lets, they host the Inside Property Investing podcast and are enjoying the digital nomad lifestyle by travelling the world on their boat with their two dogs.