Subway Tile Inspiration for your Next Project

It’s no secret that subway tiles are hugely popular at the moment. In fact they have been for a while now but there’s no sign of this trend disappearing any time soon. We’ve been looking for some subway tile inspiration for our latest project, and thought we’d share some of our favourite styles to help with your next project.

Part of the enduring appeal of subway tiles is that they can work in virtually any setting, whether you’re looking for inspiration for a modern bathroom or a traditional kitchen, there’s a subway tile and grout combination to suit your project.

This kitchen uses a basic white subway tile in an interesting way by tiling right up to the ceiling. Where your room is too small for wall units or lacks the head height, a couple of open shelves on a fully tiled wall can make an interesting feature in an otherwise potentially bare space. 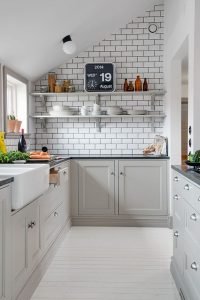 In a completely different setting, these gloss grey subway tiles prove their versatility by blending the divide between the modern wood effect on the upper wall with the traditional mosaic pattern on the floor of this bathroom. They really are suitable for any design scheme, even when that scheme involves both new and old elements. 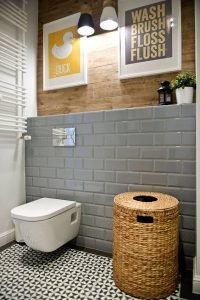 If you’re looking to make a bold statement with your kitchen or bathroom, then again subway tiles are ideal given the huge range of colours they come in.  Take these bright red gloss tiles as an example. Matched against simple white kitchen cabinets they are a much more cost effective way of creating an interesting space than opting for more expensive cabinets.  Add a few complimentary accessories and you can create a really impressive visual effect. 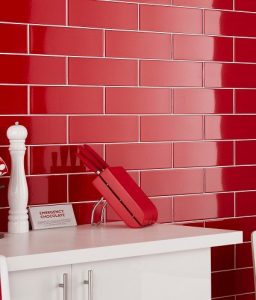 If bright red isn’t your style, this bathroom shows a much more traditional look created with a fern green tile that adds a splash of colour and brightness to this en-suite without being overpowering. There seem to be two schools of thought in the investment market at the moment regarding colour. One is still stuck in the world of magnolia, whilst the other (particularly in the HMO world) is embracing bright feature walls. I find this middle ground a much more appealing look that will attract a much wider audience without being too garish. 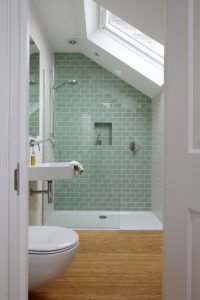 White grout is the go-to answer for most tilers who aren’t told otherwise. Whilst it can create a bit of a boring result, when used in the right way the effect can be striking.  Coupled with the grey subway tiles, the white grout pops out and makes the brick bond pattern in this bathroom really stand out.  This is a great example of a contrast grout used without adding too much personal taste to a project. 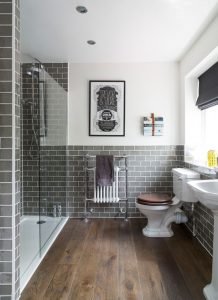 Flipping the colours on their head can have an even more striking result, like in this example of a high gloss white tile alongside a really dark grey grout.  In this case it adds to the traditional feel of the dark shaker cabinets but can equally work in a modern setting. 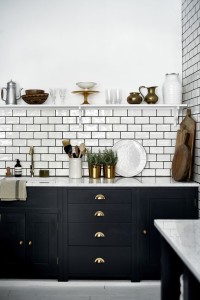 Finally, you can really push the boat out with virtually any coloured grout you can imagine. Most tile shops now offer a wide range of grout colours, with some specialists able to mix any colour you want. Whilst this particular example would suit a vibrant house share/HMO, I also think it would make a flip or single let aimed at young professionals really stand out in a boring, vanilla market. 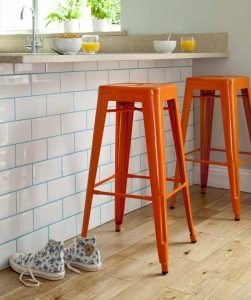 If you’re considering subway tiles but want to do something a little more creative with them, you can also look at changing the way they are laid. Typically laid in a straight horizontal or brick bond pattern, this can start to look a bit dull after a while.  Simply rotating the tiles 90 degrees can completely transform the look, like in this minimalist bathroom.  A horizontal pattern would look fairly traditional, whilst this vertical arrangement reminds me of something almost futuristic.

If you’ve got a competent tiler you can trust then even more creative patterns can be trialled, like this herringbone style wall effect using subway tiles.  The staggered edge along the top is so unusual and adds a really special feature to this kitchen that I haven’t seen before, particularly when you add dramatic contrast with the paint as well. 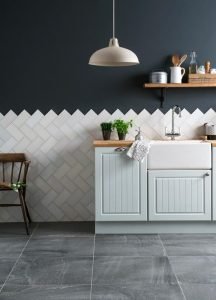 You might argue that black and white aren’t technically colours, but you know what I’m getting at! Combining two or more different subway tiles can add real interest, particularly if you plan on tiling full walls as it can help break up a room. This simple example uses a black stripe almost like a picture rail to add more character to a traditional style bathroom. 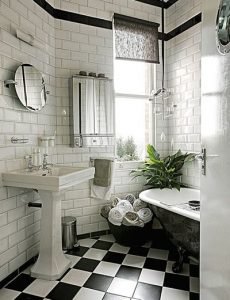 At the other end of the spectrum you can really go to town and use a whole range of different colours to create a bright and energetic display, laid in a random pattern like this wall or used to create a large scale mosaic. When you start to combine different coloured tiles the options are endless, as long as you’re brave enough to create it. 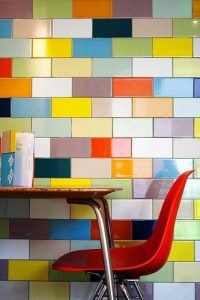 Whether your investment strategy is single lets for families or HMOs for students, serviced accommodation for travellers or flips for high-earning professionals, subway tiles can be used in any setting to create an amazing effect in both kitchens and bathrooms.

Hopefully we’ve given you some inspiration on how to use subway tiles in your next project, and we haven’t even mentioned using them on the floor yet…  Follow us on Instagram for more interior design and property investment inspiration.