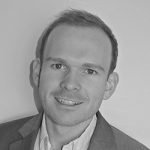 Hey Property Insiders, and I guess a welcome back is in order. It’s only been a couple of episodes that we missed but I know from a lot of you that those gaps were noticed and missed. Trust me, it felt like a lot longer than a few episodes for me.

It’s funny how you get into a routine with something after only a few short months, and every day I wasn’t recording or editing after doing 70 episodes back to back was genuinely painful. But to be honest with you and with myself, I took on too much and I finally reached my limit.

The good news is that the worst of it is now passed, and I’m hugely excited to get back behind the mic and talking to more amazing and inspiring property investors.

As with all of my monthly updates, the format of today is a little different. We don’t even have Simon from Optimise with us as he’s also on holiday at the moment, although his was a little more planned for than mine.

So we’ll keep it short, get back into the flow, and from Monday we’ll be back with a bang with more guests than you’ll know what to do with.

What got me into this mess?!

Let’s start with the elephant in the room – how the hell did I get into such a mess that I started to miss episodes? Well I could blame my male DNA making me think I was indestructable, or I could blame my wonderful fiance Victoria and my need to provide for the upcoming wedding and the fancy house and holidays and everything, but let’s be honest, she earns a lot more than I do so really she should be the one stressed out.

Basically I took on more work than I had the systems in place to deal with. I was trying to run a letting agency, manage our own home renovation, run a 3 episode per week podcast, and on top of that keep our other property projects running smoothly, and whilst this isn’t really a huge amount in the grand scheme of things, I was trying to do it all myself!

There just weren’t enough hours in the day to do it all. I was desperate to get into our new home and we’d already given notice on our last place so the house couldn’t be dropped. I had landlords reliant on me to look after their investments and tenants reliant on me to keep them in good housing so that certainly wasn’t going to be dropped. And as soon as I started working with investor finance on some of our other properties I made a commitment to them and myself to make sure that was a success, so that wasn’t going to be dropped either.

But that only left the Inside Property Investing podcast – this amazing resource that some of the top UK property investors have committed their time to help grow. Which didn’t exist at the start of the year and now gets downloaded 12,000 every single month, which has resulted in countless people at all stages of their investing journeys reach out to me and thank me for creating this content. Like I said earlier, it wasn’t easy to drop this, but it was easier than all of the alternatives. So the microphone got packed away, I got my head down, and I struggled on.

One lesson that I’ve learned from so many of my guests is that their biggest difficulty often came just before their biggest success. It was something I took to heart early on to encourage others who were struggling at the time, and whilst I know for a fact I’ll face far bigger difficulties in future, I am starting to come out the other side and the future looks brighter already.

For a start, this is the very first episode to be recorded from my new home office. I’ve got an amazing work environment, I feel in control of my future, and I’ve filled with energy and ideas about how to take all of these businesses forward. Sometimes a couple of days away from the routine, even if it is doing manual labour, is enough to recharge and refocus you. On that point, when was the last time you pulled your head up to take in the scenery and reassess if you’re still going in the right direction? Make a promise to yourself whether you’re listening to this on Friday when it’s released, or months from now. Break your routine within the next 7 days. Do something completely different, go somewhere completely new, and just absorb the environment. I’ve found that the best way to move forward is to completely switch off. 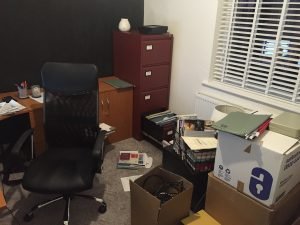 Not only do I have the new office to settle in to though, being here means we are now officially in our new home. It took a couple weeks longer than expected and a huge amount of effort over the last 2 weeks, but we’re in! We may not have every wall painted and every room furnished, but with hot water, an amazing kitchen, and a laptop to watch the Great British Bake-Off, what more do we need?

Keeping in mind this is a property podcast rather than my personal journal, let me give you a breakdown on how this one worked out. The total spend was in the region of £70,000 which is a massive oversight from the £50,000 we had budgeted, but most of this was down to scope changed on our part and adding things we didn’t consider at the start. Things still cost what we expected them to cost, we just ended up with more things. So it’s not a complete failure from that point of view. Your own home is always way more personal than any pure investment project, but it’s a great example of why not to get too emotionally attached to an investment because if you took our approach into a business context, you’d be losing money hand over first.

We bought the house for £320,000 on the 8th of April this year, so it took us just under 4 months, and early indications from local estate agents are that a valuation of at least £400,000 should be realistic. Now if you can do some basics maths, you’ll realise £320 purchase plus £70 development doesn’t leave much profit at a £400,000 valuation, but we never intended to make money on this one, and I said that right from the very beginning. As long as the end value was higher than the total spend and we had a home we were happy in for the next few years, then it was a massive success, and that’s exactly what we’ve achieved.

On the plus side, we are going to be able to release some of that additional equity by way of an increase on our mortgage, which means we’re actually getting some of the cash we spent back out to reinvest in other projects. You didn’t think I’d be leaving £70,000 as dead money for the next 5 years did you?

Our Latest HMO Is Underway 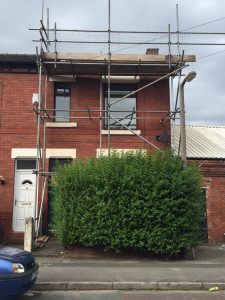 Aside from this break even project, you might have seen the picture I posted on facebook of the scaffolding going up at our licensed HMO project in Stockport? We spent a bit of extra time on the planning of this one as our architect thought he could make us smile. I’d had it on paper as a 5 bedroom but a little bit of me was worried about getting a decent sized 5th bedroom in. It would have still worked as a 4 bedroom, but our return wouldn’t have been fantastic after paying back the investor.

You can imagine how delighted I was then when I received the drawings and counted not 5 but 6 double bedrooms. I swear the guy did some sort of black magic but they look good and the layout really works. Actually, I’ll post the layout images on the show notes page for this episode so you can see how we’re getting 6 bedrooms into what was originally a 2 bedroom house. I’m saying that a little for shock value though – in fairness it had 2 large reception rooms and a loft room so it’s not a huge leap to believe it as a 6 bedroom. 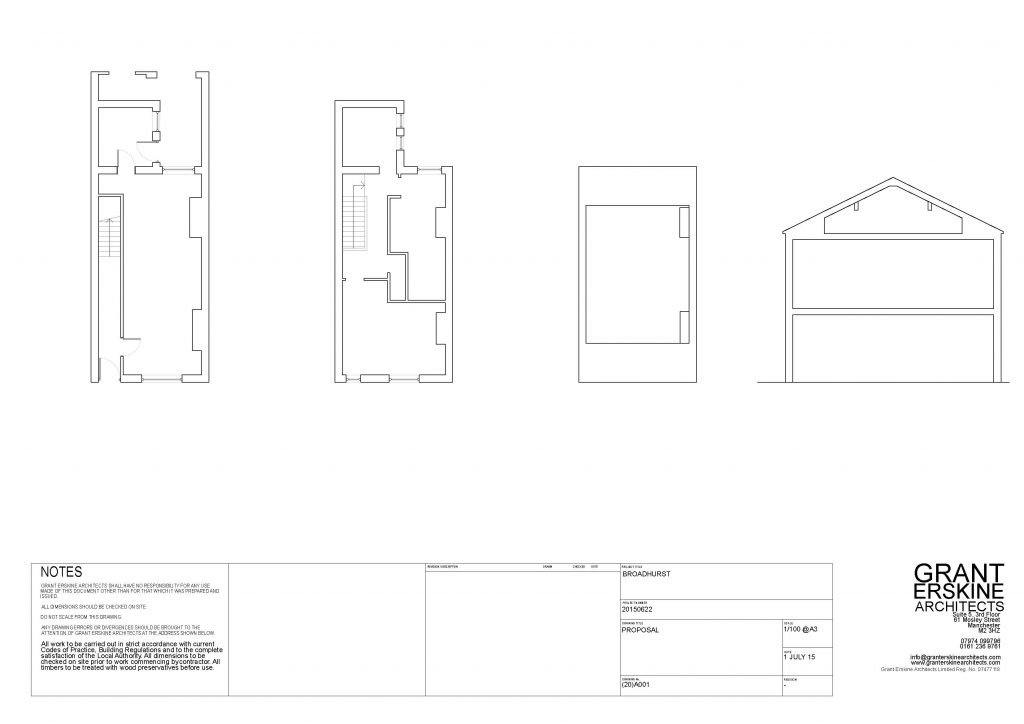 Before – The HMO layout as we bought it.  Click to expand 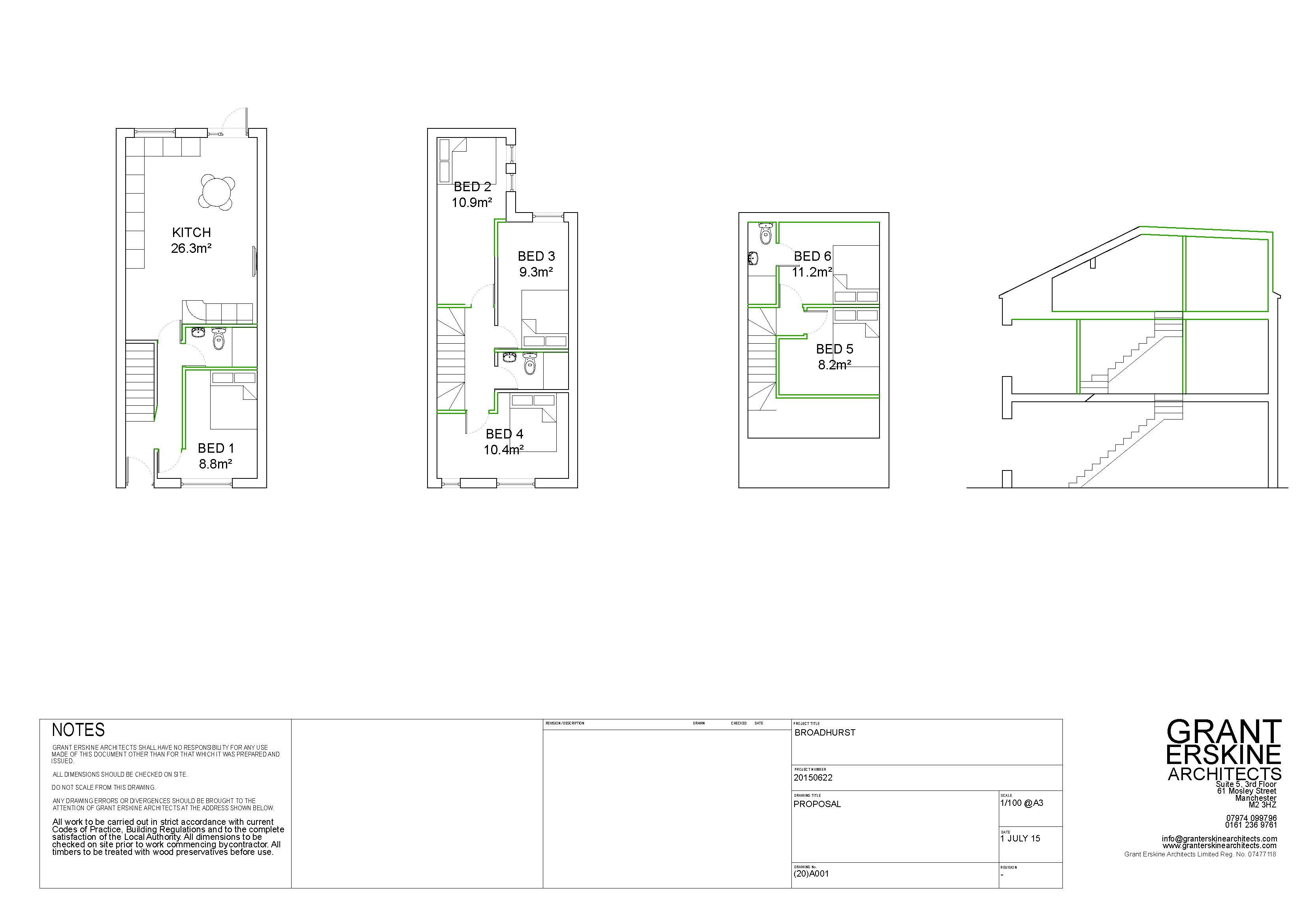 After – The HMO layout proposed by our architect.  Click to expand

This one hasn’t been plain sailing so far though. The first major issue is that there is no electricity supply. At some point it looks as though the provider got so fed up with the previous owner not paying their bills that they just came and removed the supply. We didn’t realise this until the electrician turned up to give some temporary power and realised there was nothing there to work off. It might sound like a relatively minor thing but believe me when I say that getting the electricity distributor – in our case electricity North West – to do anything quickly is impossible. Their estimate to get a new supply to the property is 25 days, meaning we’ll be running off a generator for the next few weeks.

We’d also taken on a young guy to help us strip this one out. I’d seen a couple of fellow investors discussing online different options for manual labour – everything from picking up immigrants outside Howdens for £20 a day to employing retired tradesmen for a few days a week. I put a message out on a local forum that we were looking for casual labour and I was amazed at the response we got. We settled on a young guy who had little experience but seemed really keen, and he wanted £40 a day which seemed to me like a reasonable wage.

But by the time I’d picked him up and dropped him off, shown him what to do, shown him again when he got it wrong, changed my schedule to fit his when he had college interviews and so on, it was taking me more time to employ someone to do the work than if I’d just done it on my own. The final straw was when he called me to say he’d gone outside for a smoke and the door had blown shut behind him meaning he was locked out. I was already having a manic day and this was the last thing I needed, so in a show of my once infamous short temper I picked him up, took him home and that was the end of that relationship.

Now I wouldn’t be put getting labourers in again to do all the garbage jobs that none of the other trades want to do, but I’d definitely be looking for a bit of experience next time, and I’d be far more willing to pay a little extra for someone with their own transport. Becoming a taxi service wasn’t really what I had in mind to make my life easier.

I think that’s probably enough of a moan this month. This podcast is supposed to be inspiring after all rather than depressing, so I will stop it here, thank you for listening, and promise that normal service will resume on Monday with the usual format and more amazing guests, and we’ll be back at the end of August with Simon from Optimise answering all of your tax and accounting queries.

I hope you all have a great month, and I’d love to hear from you about how your own property journeys are going either on facebook, twitter, linkedin or send me an email . See you next time property insiders!

PrevPrevious070: Jahlyn King started her property journey by purchasing her council house, and has used that as a stepping stone to build up a million pound portfolio
Next072: Harley Wilson joined the family property business at a young age and has transformed their future strategy to focus on new build developments and HMOsNext